Driven by the increased use of servers in data centers, increased use of mobile phones, and the surging number of OTT broadcasting service providers and traditional broadcasters, the Global Ethernet Controller Market is forecasted to reach ~US$ 15 Bn by 2028 says Ken Research Study.

An ethernet controller is a networking device that allows data communication in a network. Ethernet is among the widely used data transfer and communication technology in data centers, cloud computing, gaming, and personal computing. Due to the stable data transfer and communication in ethernet technology, it has seen wide adoption in servers and embedded systems. Moreover, as the trend of OTT is increasing, the demand for a seamless file or video streaming is taking place, which in turn is fueling the growth of high-end ethernet controllers.

The increasing deployment of wireless networks, the increasing population, the rising number of smartphone users, the mounting adoption of cloud services, and the emergence of Big Data are expected to fuel the market expansion. Due to the stable data transfer and communication in ethernet technology, it has seen wide adoption in servers and embedded systems.

The Global Ethernet Controller Market is expected to witness moderate growth during the forecast period (2022E-2028F) primarily due to the increasing data volume which heightened the need for Ethernet controllers, thereby driving the growth of the studied market.

According to the Ericsson Mobility Report, the decline in data packet charges and increased smartphone usage accelerated data traffic across India. The report estimates that the volume of mobile data traffic is expected to reach over 21 exabytes per month by 2025. The below chart shows the total traffic recorded from 2015 till Q1 of the current year. 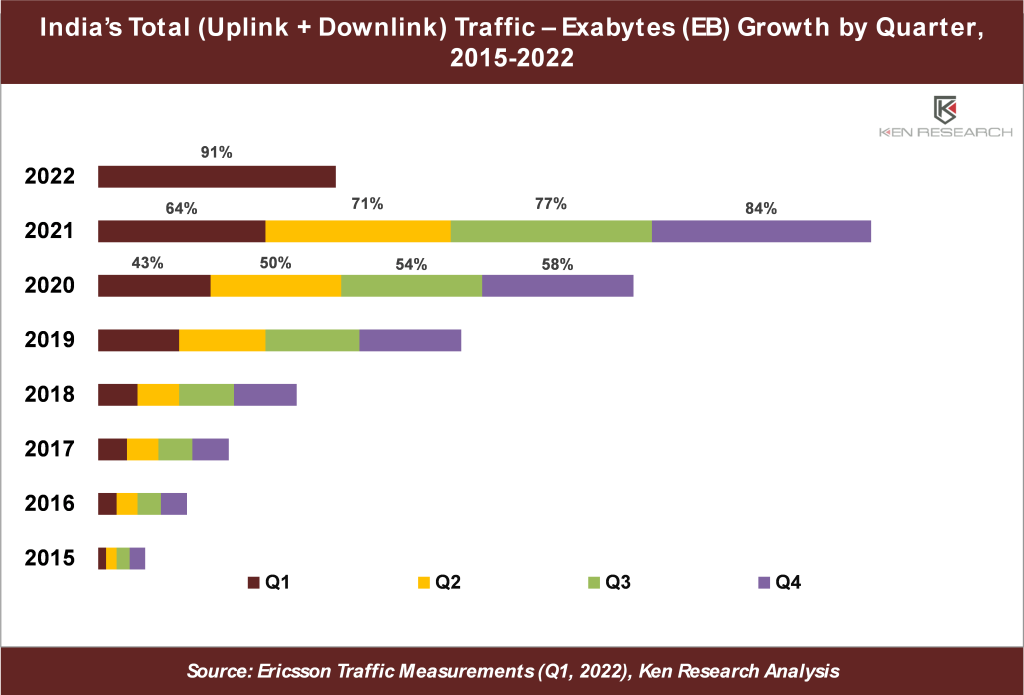 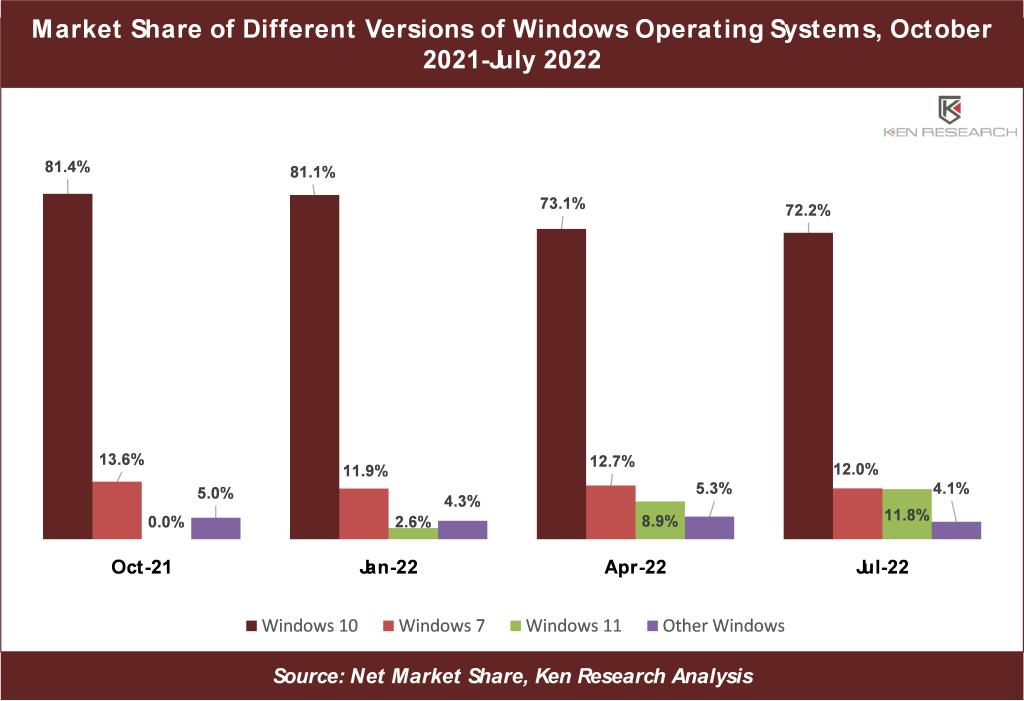 Time-to-time updation of Ethernet drivers helps Ethernet card function properly. This is necessary to ensure that the software is compatible with any new updates installed.

Windows has been updating its operating systems for better performance and with this, the ethernet drivers also need to be updated to keep up the pace and work with the latest windows updates for enhanced performance. The below chart shows the various windows OS with their market share. The declining share of Windows 10 OS and rising Windows 11 adoption requires the updation of ethernet drivers as well.

The installation of new and advanced software and increasing transfer rates are accelerating the demand for this segment.

According to Comnet, which is a manufacturer of audio, video, data, and ethernet communication products, Fast Ethernet transmission is at least 10 times faster than normal ethernet and proves to be useful in maintaining compatible connections to servers with high speed, decreasing bandwidth bottlenecks for network systems operating multiple IP videotape cameras and IoT, and seamlessly supporting complex networks that run multiple bandwidths intense software packages at the same time.

The installation of new and advanced software and increasing transfer rates are accelerating the demand for this segment. Application Device Queues (ADQ), Dynamic Device Personalization (DDP), and support for both iWARP and RoCEv2 Remote Direct Memory Access (RDMA) are included in Intel Ethernet 800 Series controllers, which provide workload-optimized performance and the flexibility to meet changing network requirements. For high-performance server applications, including NFV, storage, HPC-AI, and hybrid cloud, the 800 Series controllers provide speeds up to 100GbE. 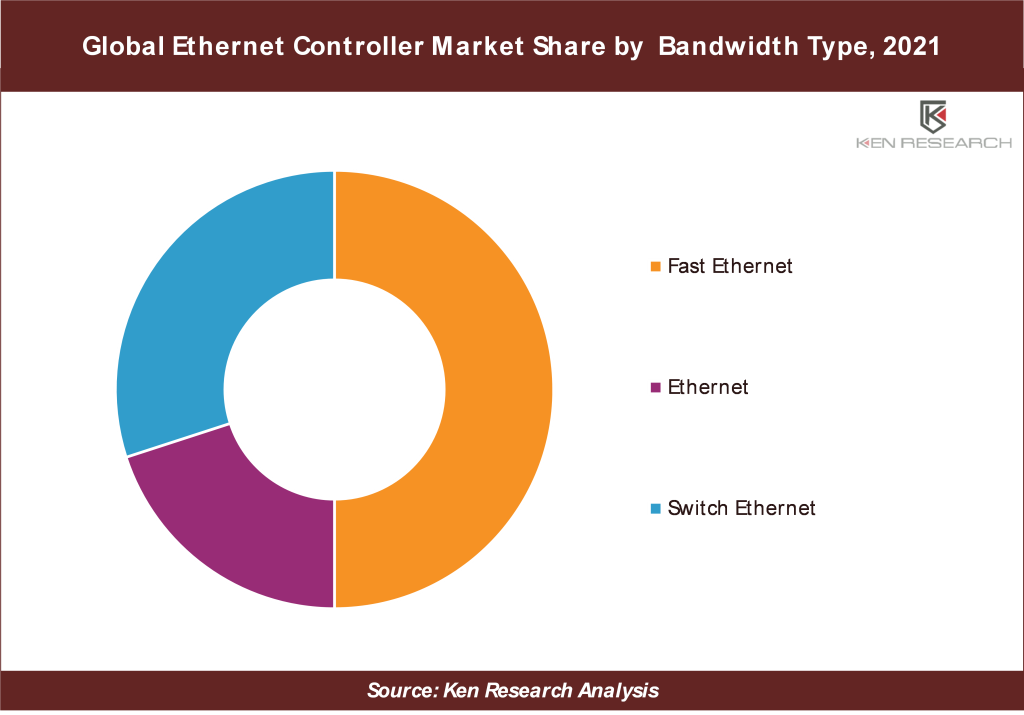 This growth is due to the growing use of ethernet controllers in consumer usage, servers, and desktop systems in the region and increases in demand for VoIP solutions, gaming consoles, and digital signage.

There has been growing adoption of technologies, such as cloud, IoT, and Big Data. For instance, the government’s strong support and the private sector’s substantial investments are responsible for the growth of China’s cloud computing industry. The South Korean government-employed cloud computing technologies to enhance its e-government services by banking on the country’s super-fast internet connectivity and stable LTE availability.