by NewsPr Today
in ऑटो
1.3k
VIEWS
Share on FacebookTwitterWhatsapp

The 2023 Auto Expo Live Day 1 New Car, Bikes, Vehicles Unveils: The 2023 Auto Expo has officially begun on January 11th, but it will be open to the public starting January 13th. Many companies will be showcasing their vehicles at this expo.

On the first day of Auto Expo 2023, the famous actor Shahrukh Khan unveiled a new vehicle. He participated in the launch of the EV car from the company, Hyundai. The company has named this special car “Loniq 5 EV”. The price of this car is 44.95 Lakh rupees. It is said that this car will soon be available in the Indian market. The launch of the Loniq 5 EV was done by Shahrukh Khan. The company officials said that this car will be available in five color options when it’s released in the market.

KIA India unveiled its new electric car, the Concept EV9 (Concept EV9) at the Auto Expo-2023. This car was first presented to the world at the 2021 Los Angeles Motor Show, but this is the first time the brand has revealed the design and features of the model. Note that the South Korean car manufacturer had previously launched the KIA EV6 in India as one of its main EVs with two variants. The KIA EV9 Concept is also similar, as the car is based on the same platform. Additionally, production of the KIA Concept EV9 is set to begin soon.

At the Auto Expo-2023, Hyundai Motor India launched its new electric car, the Hyundai IONIQ 5. This car has been presented with a stunning design and ultra-fast charging support. The IONIQ 5 comes with a 350 kW charger, which the company claims can charge the car from 10% to 80% in just 18 minutes. According to the company, IONIQ 5 users will only need to charge their vehicle for five minutes to get a range of 100km. Now, let’s take a look at the other features and specifications of the car. 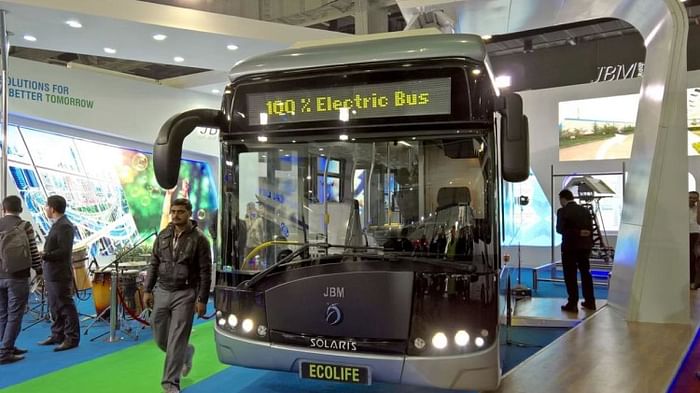 During the launch of the JBM Galaxy Bus, the company stated that the launch of the JBM Luxury Coach represents a historic change for the coach industry in the country, which has so far been dominated by foreign companies. It is a part of the government’s ‘Make in India‘ initiative. The company also announced the launch of three new products in the electric bus series – City, Staff, and School segments – catering to different platforms. This new launch will further strengthen JBM Group’s vision of making India a global EV hub.